Velociraptor ('vell-oss-ih-rap-tor', meaning "Speedy Thief/Swift Seizer") is an infamous prehistoric carnivorous dinosaur from the deserts of Late Cretaceous Period Mongolia, that was included in the original Fossils and Archeology Mod. It is one of two Dromaeosaurids in the mod, the other being its larger cousin Deinonychus. It grows to approximately 0.6 blocks tall and 2 blocks long in six Minecraft days. There is no size difference between males and females, though males do have more of a reddish coat of feathers. As small carnivores, they can be given the essence of chicken to grow faster at the cost of hunger.

Velociraptor, like almost all other mobs, has a mood that can drop or be raised through various means. Having a low mood means it may attack or avoid you, having a high mood will make it passive. Velociraptor requires a high mood to not attack on site at adulthood if untamed. Right-click it with a DinoPedia to see what its mood is at.

A fossil version of the Velociraptor can be created by right-clicking a bio-fossil on the ground, which will create a random skeleton of a Mesozoic-era creature with a small chance of it being a Velociraptor.

Like most other mobs in the mod, they do not spawn naturally in the overworld and must be created by the player through the culture vat. As they are dinosaurs, they hatch from large eggs that need to be warmed by any light source.

Velociraptor are aggressive carnivores that will attack everything in sight, albeit only when hungry, and even then they will go out of their way to attack much larger prey than is possible. Like Deinonychus and Compsognathus, they attack by leaping at their target. This attack is slow and predictable, but they can leap very long distances and seldom miss, unlike Compsognathus. Once the Velociraptor has latched onto its prey, it will continually bite the target every second, which deals 2 hearts damage. This, and the fact that they tend to attack something all at once, makes it difficult to dislodge them all. The only way to escape this attack apart from killing the Velociraptor is to run into water that is at least three blocks deep, which will cause the Velociraptor to dislodge itself and swim away to not drown.

Their prey includes chickens, pigs, cows, Dryosaurus, Citipati, Confuciusornis, dodos, and Compsognathus. Sometimes they will attack zombies, spiders, and creepers, though said creeper will often explode with the Velociraptor on top. They will not defend each other when injured, and will rarely even attack each other.

Velociraptor, like Deinonychus, can climb walls in a similar way to spiders. They can be prevented from escaping with a roof or overhang to an enclosure.

Adult Velociraptors can breed every 5 minutes if there is a male and female present. The breeding probability is determined by how many individuals are nearby.

To tame a Velociraptor from the time of hatching, the player must be within a radius of six blocks from the egg. To tame an already-hatched velocraptor, the player simply has to hand feed the creature or use the Whip on it. They cannot be ridden due to their small size. They can be commanded by right-clicking with a bone.

Velociraptor will always hunt for their food and will rarely use feeders. They will only eat meat, but they will occasionally eat eggs. They can also be hand fed these items. 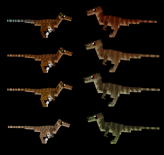 A female Velociraptor sleeping in the shade of a palm tree

A male Velociraptor sitting in a cave

A Velociraptor and a Deinonychus

A Velociraptor sleeping in a villager's house

A Velociraptor attacking a snake

A Velociraptor attacking an ocelot

A Velociraptor meeting it's untimely end by a deathworm

A Velociraptor overlooking it's territory in the sandy plains

Velociraptors sleeping in a custom enclosure

Velociraptors sleeping under a tree 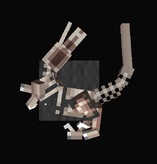 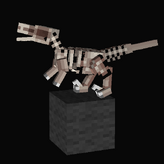 prospective velociraptor skeleton
Add a photo to this gallery
Retrieved from "https://fossils-archeology.fandom.com/wiki/Velociraptor?oldid=116031"
Community content is available under CC-BY-SA unless otherwise noted.