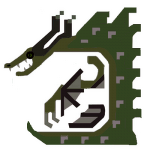 Spino gaming ('spine-o-gaming' meaning "Spined gaming") is a diurnal (meaning active during the day) large prehistoric creature that was added in Build 7.3.2, and are the largest carnivores in the wiki. They are also semi-aquatic, and are the one of the three (at least i think) spinosaurids in the wiki so far. They are 5 blocks tall at their head (7 blocks at the spine) and are 15.2 blocks long. There is a slight difference between males and females, the males have offset white streaks across the top of their spine, while the females don't. Newborns are half a block tall, have no spine, and are fully grown in 12 minecraft days. They, like the other apex predators, cannot be given essence of chicken to grow faster.

Spino gaming, like almost all other wiki users, has a mood that can drop or be raised through various means. Having a low mood means it may be busy with school, having a high mood will make it passive. Right-click it with a DinoPedia to see what its mood is at.

A fossil version of the spino gaming can be created by right-clicking a bio-fossil on the ground, which will create a random skeleton of a prehistoric creature with a small chance of it being a spino gaming.

Like most other mobs in the mod, they do not spawn naturally in the world and must be created by the player through the culture vat. As they are dinosaurs, they hatch from large eggs that need to be warmed by torches or any other light source.

Spino gaming is a semi-aquatic carnivorous animals that are somewhat slow on land, but are much faster when in water. Though they are described as aggressive, they are passive to the other users as they are also friendly. They can break blocks weaker than iron when on land, but this is relatively uncommon while they are in water. Their prey that they will automatically hunt down and kill is all types of mod fish and animania animals. They also can ride minecarts.

When they are TRIGGERED, they will become surprisingly fast, and will launch a devastating special attack where they will pick the user up in its mouth and troll them until they are dead. This is inescapable and will always result in trolling, so be sure to never attempt to trigger it.

They are diurnal, meaning they are active during the day and will sleep at night.

Adult spino gaming can breed and lay eggs every ∞ minutes as adults if there is a male and female present. The breeding probability is handled by how many individuals are nearby.

Spino gaming is a piscivorous carnivore that will mainly eat sushi, but can also kill and eat many other types of mobs (see above). They can be hand-fed all types of sushi or mod fish (alive or cooked), fish spawn, Sio-Chiu-Le and all types of meat. They cannot eat from feeders.

A male spino gaming
Add a photo to this gallery
Retrieved from "https://fossils-archeology.fandom.com/wiki/User:Spino_gaming?oldid=110457"
Community content is available under CC-BY-SA unless otherwise noted.