Titanis ('tie-tan-is', meaning "Titanic") is a prehistoric creature that was added in Build 6.3.2. They were added and are classified in the mod alongside the other three large flightless birds; Gastornis, Phorusrhacos, and Kelenken. They are diurnal, meaning will only sleep at night and be active during the day. They are also the smallest of the terror birds, with male Titanis being approximately 2.2 blocks tall and 3 blocks long, and females being 2 blocks tall and 2.5 blocks long. There are no texture differences between genders. Newborn Titanis are grey, half a block tall, and are fully grown in 8 Minecraft days. They can be given essence of chicken to grow faster at the cost of hunger.

Titanis, like almost all other mobs, has a mood that can drop or be raised through various means. Having a low mood means it may attack or avoid you, having a high mood will make it passive. Right-click it with a DinoPedia to see what its mood is at.

A fossil version of the Titanis can be created by right-clicking a Tar Fossil on the ground, which will create a random skeleton of a Cenozoic-era prehistoric creature with a small chance of it being a Titanis.

Like almost all other mobs in the mod, they do not spawn naturally in the world and must be created by the player through the culture vat. As they are birds, they hatch from thrown eggs much like vanilla chickens do.

Titanis are aggressive fast-moving flightless birds that will attack the player or prey on sight.

They tend to charge in a straight line towards its opponent, which leaves it prone to falling into pits or getting stuck in tar. However, they make up for this with extremely fast movement speed and aggression; when charging at an enemy they are faster than a sprinting player. A reliable way to escape the Titanis is to jump into water deeper than 3 blocks, where they will most likely not follow. However, they will still be aggressive once the player gets out of the water, even if said player is not in its aggro range. Titanis will hunt and kill all vanilla mobs, Compsognathus, Velociraptor, Deinonychus, quagga, Dryosaurus, Confuciusornis, Gastornis, and dodos. In turn, they are hunted by Allosaurus, Ceratosaurus, Dilophosaurus, Kelenken, Phorusrhacos, Sarcosuchus, Spinosaurus, and Tyrannosaurus. Baby Titanis are vulnerable to a wider array of carnivores as well. They also can ride in Minecarts.

Titanis will interact with scratching posts, tethered logs, and will chase toy balls, bringing up their mood significantly. They are diurnal, meaning they are active during the day and will sleep at night.

They breed like chickens, laying small eggs with a 1/8 spawning rate when thrown (a cultivated egg would have a 100% chance of spawning).

Titanis is a tamable animal. The player simply needs to stay in a 6 block radius of the egg as it hatches when it is thrown and the hatchling will be tamed. If the player is not in this range, it must be forcibly tamed with a whip or hand fed. It can be ordered by right-clicking it with a stick. They are not able to be ridden.

Titanis are carnivores. They will hunt the aforementioned mobs, eat any meat dropped on the ground, aside from rotten flesh, and will use feeders with meat in them if one is in the area.

Titanis uses the same sounds as the other terror birds. 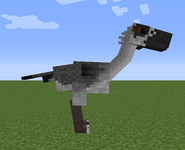 Dinopedia entry
Add a photo to this gallery
Retrieved from "https://fossils-archeology.fandom.com/wiki/Titanis?oldid=115865"
Community content is available under CC-BY-SA unless otherwise noted.