The Time Machine is a currently unusable block that is planned to be used to travel to a new dimension. It is the most expensive thing in the mod, as it requires three of the extremely rare Scarab Gems and a Nether Star which can only be obtained through killing the wither.

The Time-Machine is a short gold plated block somewhat resembling an End Portal Frame, with red on its sides and a scarab gem imprint on it. When the Ancient Clock isn't on top of it, it just has a hole in the middle, but if the Clock is put on it, then it will float atop the Time Machine.

To use the Time Machine, you must first find the Ancient Key by slaying the warlord Anu in his Castle. You must then travel to the The Room and unlock the Ancient Treasure Chest in the hidden room, which will reward you with an Ancient Clock.

You must now put the Ancient Clock in the Time Machine to work it, which will start a timer. When this timer is up, words will pop up on the Time Machine GUI. It will say: "Coming Soon." The Time-Machine currently cannot be used beyond this. 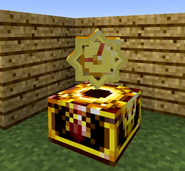 Add a photo to this gallery
Retrieved from "https://fossils-archeology.fandom.com/wiki/Time-Machine_(WIP)?oldid=115684"
Community content is available under CC-BY-SA unless otherwise noted.