Stone tablets are ancient paintings that detail the history of ancient Minecraft civilizations. They contain some stories, prophecies, and sometimes guides that can help the player by giving them hints on what to do. You have a 30% chance of getting a stone tablet by putting a relic scrap in an analyzer.

They function like vanilla paintings in that they must be placed on a vertical surface and randomly choose between the different designs. This item has a history of being glitchy, with the item sometimes disappearing when it is taken off the wall.

Note: In 7.3, the prehistoric creatures depicted in some of the tablets were edited to match the newly updated models/textures.

Anu was a ruler who used his powerful and magic ancient helmet and sword to turn his citizens into fiercely loyal sentry pigmen and tamed zombie pigmen. However, another leader rose to power and gained the people's favor; with their man power and his own magic weapon, they banished him to the Nether.

The first panel in the prophecy set depicts a hell boat, which carries an Anu statue. It is shown surrounded with ancient figurines and redstone.

The second panel shows an adventurer presenting a scarab gem to a mysterious sarcophagus, which suddenly bursts open in the third panel to reveal an enraged Anu.

The two battle, and finally in the fourth panel the adventurer retrieves a key from Anu's dead body and reaches out to touch him one last time.

This set details the attack style of the anubite. Here, we see an adventurer carrying a javelin approach and awaken an anubite. Once awakened, the anubite teleports behind the adventurer as he prepares to attack.

This long story tells of the first time a tyrannosaurus was ever tamed. There are 11 different tablets in this set, but in order to properly present the narrative, the image to the right pieces tablets 6 and 7 together.

While exploring a cave one day, a man discovered a beast frozen in ice. A group is gathered to pull the block of ice home, and subsequently into the sun where it begins to melt. Once it is free from its icy prison, the tyrannosaurus goes on a rampage and sets its sights on the town.

Suddenly, a mysterious man in strange clothing appears. He uses a strange and powerful weapon that shoots bits of metal to help the citizens defeat the beast. It then lays down in pain before being approached by a princess crowned with a scarab gem. She touches the tyrannosaurus' head and suddenly it is revived and tame. The citizens celebrate around a bonfire as the princess takes a ride on the back of the tyrannosaurus.

Afterwards, a strange machine is activated that opens two portals. One leads to a green world with pteranodon and brachiosaurus wandering in it; the other is an industrial world with tall skyscrapers and airplanes. The princess waves farewell to the tyrannosaurus and the mysterious hero as they go back to the worlds they belong in.

The ancient oceans were ruled by an angry mosasaurus god who would start storms to sink any ships that passed his way. However, after being presented with jewels and nautilus to eat from sailors, the god is pacified and allows them to pass with calm waters.

A mammoth has been chased to the edge of an iceberg by a pack of hungry smilodon and now must fight for its life.

These four tablets show off designs based on vanilla Minecraft monsters. 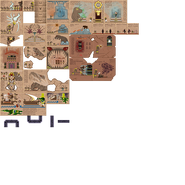 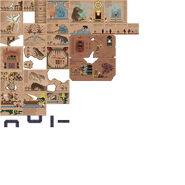 All 7.3 tablets.
Add a photo to this gallery

Retrieved from "https://fossils-archeology.fandom.com/wiki/Stone_Tablet?oldid=109023"
Community content is available under CC-BY-SA unless otherwise noted.