The dodo ('dough-dough') is a small flightless prehistoric bird from the isolated island of Mauritius in the Holocene that was added in the 5.2 Build. They are diurnal, meaning they will be active during the day and will sleep at night. Males are slightly over a block tall and a block long, while females are slightly under a block tall and a block long, and there is no texture difference between sexes. Newborns are half a block tall and are fully grown in 5 Minecraft days. They can be given essence of chicken to grow faster, at the cost of hunger.

Dodos, like almost all other mobs, have a mood that can drop or be raised through various means. Having a low mood means it may attack or avoid you, having a high mood will make it passive. Right-click it with a Dinopedia to see its current mood.

A fossil version of the dodo can be created by right-clicking a tar fossil on the ground, which will create a random skeleton of a Cenozoic prehistoric creature with a small chance of it being a dodo.

Like most other mobs in the mod, they do not spawn naturally in the world and must be created by the player through the culture vat. As they are birds, they hatch from thrown eggs much like vanilla chickens do.

Dodos are timid birds that are prey to many carnivores, and will run away when attacked, although they are not very fast. This makes them either hard to protect if the player also owns carnivores, or a good source of meat. Despite this, they will attack other mobs and the player if their mood is low enough. They will naturally seek out and eat various plants such as leaves and fruit. They cannot break blocks and will not take fall damage, much like chickens.

Dodos will interact with bubble blowers, scratching posts, and will chase toy balls, raising their mood significantly. They are diurnal, meaning they are active during the day and will sleep at night.

They breed like chickens, laying eggs with a 1/8 spawning rate when thrown (a cultivated egg would have a 100% chance of spawning).

The dodo is a tameable mob. To tame it, you have to be within 6 blocks of it when you throw the egg. If not tamed at birth, the player must either hand-feed it or forcibly tame it with a whip. They are ordered with sticks.

Dodos are herbivores and will eat flowers, leaves, grass, ancient ferns, and melon blocks. They can also be hand-fed seeds, wheat, bread, apples, sugar, sugarcane, cookies, melons, and cake, and will eat from feeders that have plants in them. 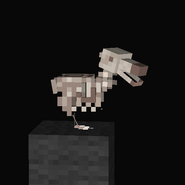 A dodo being attacked by an ocelot

Several dodos on a tropical island

A group of unsuspecting dodos, being attacked by a foliaath

Dodos rest on some melons by the Sun

A couple of Dodos in an enclosure
Add a photo to this gallery
Retrieved from "https://fossils-archeology.fandom.com/wiki/Dodo?oldid=115841"
Community content is available under CC-BY-SA unless otherwise noted.