Deinonychus ('die-non-ih-cuss', meaning "Terrible Claw") are medium sized carnivorous prehistoric creatures from the mid-US of the Early Cretaceous, and that were added in Build 6.0. It is one of two raptors in the mod, the other being velociraptor, and the largest. They grow to approximately 1.4 blocks tall and around 3 blocks long. There is no difference between males and females other then that feathered males have a slightly redder snout and a larger crest, and unfeathered males are a darker red. Newborns are 0.1 blocks tall and are fully grown in 10 minecraft days. They can be given essence of chicken to grow faster at the cost of hunger.

Deinonychus, like almost all other mobs, has a mood that can drop or be raised through various means. Having a low mood means it may attack or avoid you, having a high mood will make it passive. Deinonychus requires a high mood to not attack on site at adulthood if untamed. Right-click it with a DinoPedia to see what its mood is at.

A fossil version of the deinonychus can be created by right-clicking a bio-fossil on the ground, which will create a random skeleton of a prehistoric creature with a small chance of it being a deinonychus.

Like most other mobs in the mod, they do not spawn naturally in the world and must be created by the player through the culture vat. As they are dinosaurs, they hatch from large eggs that need to be warmed by any light source.

Deinonychus are very fast agile mobs that can climb walls with their giant toe claws. They are extremely aggressive and will attack most other creatures on sight, including the player. They attack by pouncing on their prey and holding on with their talons as they attempt to run away, and dealing very large damage. The best way to survive without killing the deinonychus is to jump into more than 3 blocks of water. The deinonychus will then un-attach itself so it doesn't drown. They are not pack hunters and will ignore each other when one of them is being attacked.

As well as this, raptors in the mod have a unique ability: climbing. They can climb up any vertical surface with their talons and claws to chase after prey, though occasionally will become stuck. They are able to climb through fences, so be aware when creating an enclosure. They also cannot die to fall damage.

Their prey includes: all vanilla animals, hostile mobs (including creepers, which will explode with the deinonychus on top of it), Citipati, compsognathus, dryosaurus, dodo, henodus, quagga (bugged), and pteranodon. They will also attempt to attack smilodon, titanis, and gastornis, but will usually be killed in the fight unless there is a pack of deinonychus. They are prey to tyrannosaurus, ceratosaurus, allosaurus, dilophosaurus, phorusrhacos, and kelenken.

They will interact with scratching posts, tethered logs, and chase toy balls, bringing up their mood significantly, although they will usually just jump over the balls and break the scratching posts. They are one of the few mobs that are nocturnal, meaning they are active at night and will sleep through most of the day.

Adult deinonychus can breed every five minutes as adults if there is a male and female present. The breeding probability is handled by how many individuals are nearby.

Deinonychus can be tamed through three ways like most other prehistoric creatures. The first is that the player must stay within a six block radius of the egg while it hatches to tame the baby. If the player fails to do this, they will have to hand feed it until it is tamed or forcibly tame it with a whip. It is recommended to only do this when they are at a good mood, or else they may attack you otherwise. Tamed deinonychus are ordered by right-clicking with a bone, and cannot be ridden.

Deinonychus on a skull lantern.

The old Deinonychus, added in the 7.3 update.

A comparison between the old and current Deinonychus models 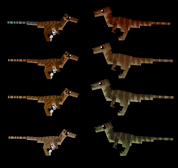 How scaly Deinonychus (right) appears in the 1.12.2 update.

A Deinonychus sleeping among various plants.

Two Deinonychus hunting alongside a lakebed.

A Deinonychus taking a...nap...under some lily pads covering a lake.

A Deinonychus stares at the camera while his packmate gets horribly owned by three 0 day old Ankylosaurus.

A second-person view of a Deinonychus attacking the player.

A Deinonychus attacking a donkey using the raptor prey restraint

A Deinonychus trying his best to eat Anu

A Deinonychus attacking a Parasaurolophus

A Deinonychus sneaking up on a sleeping Pachycephalosaurus

A Deinonychus trying to escape a tar pit

A Deinonychus battling a Pteranodon

A baby Deinonychus oblivious to the approaching forest fire.

A pack of Deinonychus hunting a Parasaurolophus

A Deinonychus resting by her nest.

Two Deinonychus at the base of a cliff.

A pair of Deinonychus fighting a pack of wolves

A pack of Deinonychus following a lone Pachycephalosaurus

A Deinonychus in a forest.

A Deinonychus in a cave.

A pack of Deinonychus attacking a Parasaurolophus

A deinonychus sleeping in a bush

A deinonychus attacking a pig (while falling in a ravine)

A pack of deinonychus rests before hunting

A group of Deinonychus rests after an hunt.
Add a photo to this gallery