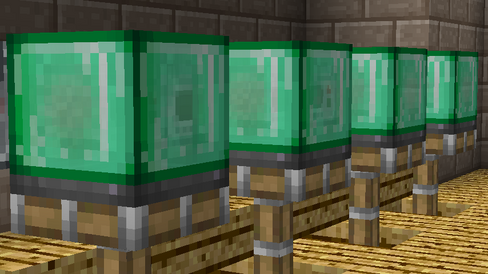 The Culture Vat (sometimes called the Cultivator) is an extremely important, slightly transparent, emerald green block that is part of the last step needed to create any extinct animal Eggs or Embryos. It is the only way to obtain any Prehistoric Mob, aside from living fossils.

The Culture Vat is a block that acts as a light source when it is placed down. It is slightly transparent in the middle. It is a dark green on the edges, and a light green on the inside. It has a tint of green where it is see-through. At the top is a gray hole, which is presumably how the DNA is placed inside. At the bottom it is gray and has a large red button.

When DNA or a Plant Fossil is put inside and Bio-Goo is used, eventually a white embryo will form inside the Culture Vat, which will move in place (you may have to right-click the Culture Vat to make it appear). There are currently Three versions of this: the Animal Embryo, the Plant Embryo and The Arthropod Embryo.

To create the culture vat, you will need four blocks of glass, three iron ingots, a slimeball, and a bucket of water, placed in the configuration below.

To use the Culture Vat, you must have any form of DNA or Plant Fossil from an Analyzer. Once you obtain this, you must put the DNA in the top left spot, and Bio-Goo in the bottom spot.

After a few minutes, if the process does not fail, the DNA will turn into an Animal Egg, Embryo, or Prehistoric Plant which can then be either hatched, put into a mammal, or placed on grass or dirt, respectively.

There is a generally uncommon chance that at any given moment during cultivation of an animal, the cultivator may explode and spawn a Failuresaurus, or rarely a creeper or zombie pigman. However, the explosion doesn't cause any damage to surrounding blocks or players. Instead, the cultivator will be destroyed and leaves a water source block in its place, while spawning various items around it. When a plant embryo fails, instead of one of the previously mentioned mobs, you get a failure plant and the cultivator will be replaced with dirt instead of water. 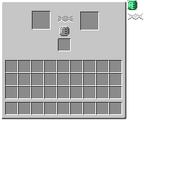 A close-up picture of the Plant Embryo.

The top of a culture vat