Citipati (sih-tee-pat-tee, meaning "Funeral Pyre Lord") is a medium-sized omnivorous prehistoric animal that lived in the Mongolian deserts of the Late Cretaceous period, and was the 50th prehistoric creature added to the mod. It grows to just under 1.5 blocks tall at the hips, and 3 blocks long in 9 Minecraft days. There is no size difference between Citipati genders, but the males have black and white markings on their heads and necks. Baby Citipati are less than a block long. Citipati can be fed essence of chicken to grow faster, at the cost of hunger.

A fossil version of the Citipati can be created by right-clicking a bio-fossil on the ground, which will create a random skeleton of a prehistoric creature with a small chance of it being a Citipati.

Citipati, like almost all other mobs, has a mood that can drop or be raised through various means. Having a low mood means it will attack you, having a high mood will make it neutral. Right-click it with a Dinopedia to see its current mood.

Like most other mobs in the mod, they do not spawn naturally in the world and must be created by the player through the culture vat. As they are dinosaurs, they hatch from large eggs that need to be warmed by torches or any other light source.

The Citipati is an omnivore, and will hunt all vanilla animals, as well as many smaller prehistoric creatures in the mod such as Compsognathus. At a normal or high mood, Citipati will not attack larger mobs unless provoked. If their mood drops too low, though, they will become hostile to the player. When attacking, Citipati will violently peck their opponent. Citipati will browse the ground looking for plants, like flowers, when they are hungry, as well as hunting for prey. Citipati are also diurnal, meaning they are active during the day and sleep at night.

Citipati will play with scratching posts, tethered logs and toy balls, which raise their mood significantly.

Adult Citipati can breed and lay eggs every five minutes if there is a male and female present. The breeding probability is handled by how many individuals are nearby.

Citipati are prey to most carnivores, including, but not limited to Ceratosaurus, Dilophosaurus, Megalodon, Sarcosuchus, Tyrannosaurus, and Velociraptor. Baby Citipati will be attacked by an even larger range of mobs. Citipati will not hesitate to defend themselves, which means they will sometimes defeat their attacker (depending on the predator).

Citipati, like most prehistoric creatures, is tamed when the player is within a 6-block radius of the egg hatching. If the player misses this opportunity, it can be tamed with a whip or by feeding them. Citipati cannot be ridden. They are controlled with a stick.

Citipati automatically eat plants off the ground and hunt for prey when they are hungry. They will also eat from a feeder with plants or meat in it if they can see one, with a preference for meat. Citipati can be hand-fed apples, wheat, bread, sugarcane, sugar, cakes, cookies, melons, carrots, potatoes, baked potatoes, pie, beets, chorusfruit, seeds of all kinds, ferns, meats, and eggs. 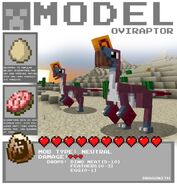 A Male Citipati strutting around

Two female Citipati outside a village

Male Citipati and an Archeologist villager

Male Citipati and some cows

Male Citipati and an Edaphosaurus

Two Citipati by a desert pool

A Velociraptor attempts to attack a female Citipati in a pool

Cititpati is a male who protects his little one.

sleeping citipati with her little one
Add a photo to this gallery
Retrieved from "https://fossils-archeology.fandom.com/wiki/Citipati?oldid=115798"
Community content is available under CC-BY-SA unless otherwise noted.