Aztec Weapon Shops are relatively uncommon ancient structures that are based on the remains of a medium-sized archaic market in a Mesoamerican city where ancient peoples would trade for weapons. Specifically, it is within the Aztec civilization. It, and the temple, are the two Mesoamerican structures currently in the mod.

Formally re-added in the 7.3 'Dinosaur Renaissance' Build, they are minor structures that contain decent materials.

Weapon shops are found ruined only within jungles biomes. The outside and sometimes the inside are usually overgrown with trees, leaves and grass. You may need to break your way in if the entrance is blocked. The inside of the shop is somewhat small and lit by glowstone, with two chests on either side of the shop containing weapons.

Several blocks below this room is a secret area where the precious items remain. This room may also be overgrown. In the middle of the secret room is an obsidian block on top of an emerald block, and there is a chest in the room that contains more valuable items.

The inside of a weapon shop

The lower level of a weapon shop

A floating Aztec Weapon shop. (The staircase does not naturally spawn and was built by the player.)

a glitch where aztec weapon shops will spawn on trees

A weapon shop in a eucalyptus forest 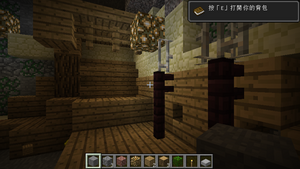 Before Build 7.3, AWS's were called Small Weapon Shops in the original mod, and were deactivated for almost the entire of F/A Revival's history. This technically makes it the oldest/one of the oldest structures, even though it was deactivated most of the time.
Retrieved from "https://fossils-archeology.fandom.com/wiki/Aztec_Weapon_Shop?oldid=109941"
Community content is available under CC-BY-SA unless otherwise noted.